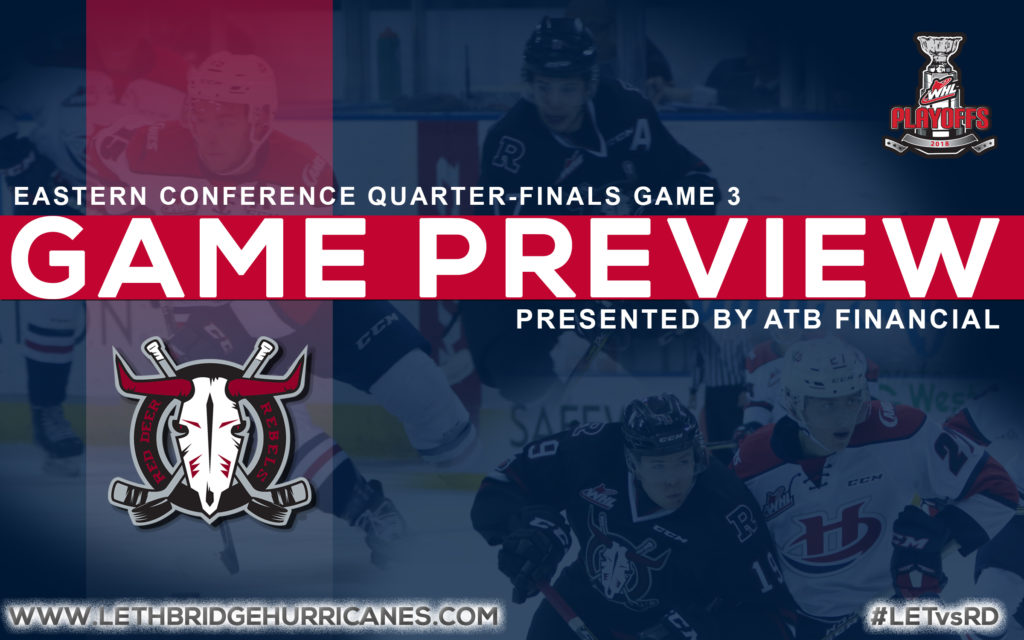 Red Deer, AB – The Lethbridge Hurricanes look to take a stranglehold on their first round best-of-seven first round series with the Red Deer Rebels tonight at 7:00pm at the ENMAX Centrium in Red Deer.

The Hurricanes hold a 2-0 series advantage after earning a pair of victories on the weekend at home. The ‘Canes won 6-0 in Game 1 and followed that up with an 8-3 thumping of the Rebels in Game 2. Brad Morrison had a six point effort in the second game while Dylan Cozens had four points, including a hat-trick.

Tonight’s Game 3 can be heard on 106.7 ROCK or watched at either Browns Socialhouse locations in Lethbridge.

PLAYOFF SERIES: Tonight will be Game 3 of the best-of-seven first round series between the Hurricanes and the Rebels. The Hurricanes hold a 2-0 series lead. It is the second straight season that the two teams have met in the opening round of the post-season.

Game 3’s: The Hurricanes enter tonight having posted an all-time record of 15-18 in Game 3’s in their post-season history. The ‘Canes were handed a 4-3 double overtime loss by the Rebels in their first round playoff meeting last year in Red Deer.

Most In A While: On Saturday, the Hurricanes exploded for eight goals in an 8-3 triumph over the Rebels in Game 2 of their series. It was the first time the ‘Canes have scored eight goals in a post-season game since they earned an 8-4 win in Game 3 of the first round against the Saskatoon Blades back on March 25th/1992. The most goals ever scored in a playoff game by the Hurricanes is 12, having been done twice.