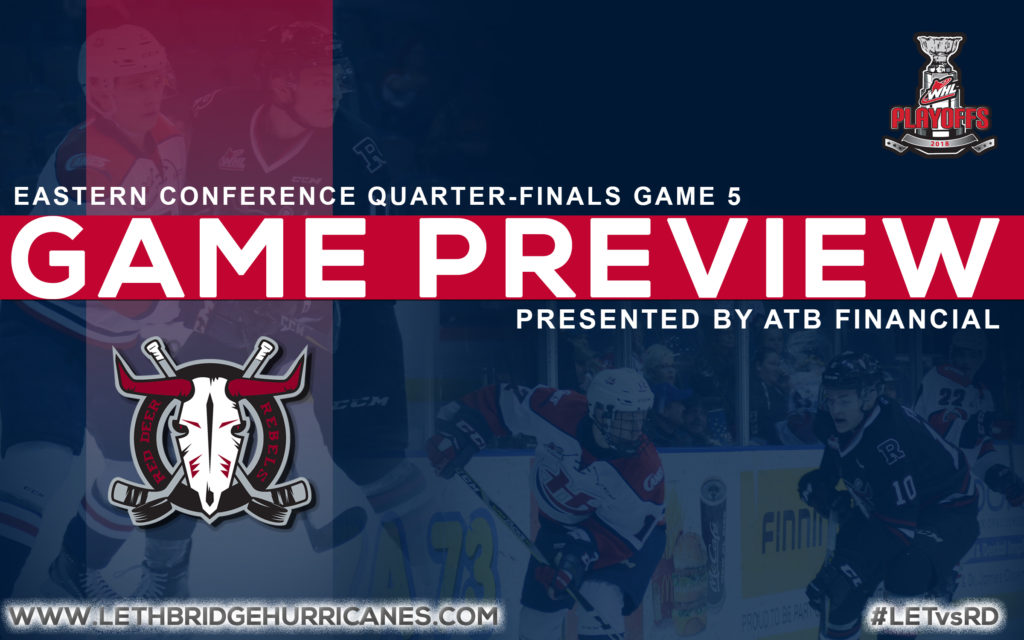 Lethbridge, AB – The Lethbridge Hurricanes will look to advance to the second round of the WHL Playoffs as they host the Red Deer Rebels in Game 5 of their best-of-seven first round series tonight at 7:00pm at the ENMAX Centre.

The Hurricanes hold a 3-1 series lead in the series after winning the first three games. The Rebels answered back with a victory in Game 4 on Wednesday in Red Deer as they earned a 5-2 win. Matthew Stanley and Tate Olson scored in the losing cause for the Hurricanes while Logan Flodell made 31 saves.

The Rebels will once again look to keep their season alive tonight and force a Game 6. Ethan Anders made 28 saves in the victory in Game 4 in Red Deer while Reese Johnson, Mason McCarty, Brandon Hagel, Alexander Alexeyev and Kristian Reichel scored in the win.

Tickets are still available for tonight’s game and can be purchased online, by calling 403-329-SEAT (7328) or by visiting the ENMAX Centre Ticket Centre.

PLAYOFF SERIES: Tonight will be Game 5 of the best-of-seven first round series between the Hurricanes and the Rebels. The Hurricanes hold a 3-1 series lead. It is the second straight season that the two teams have met in the opening round of the post-season.

Game 5’s: The Hurricanes enter tonight having posted an all-time record of 10-10 in Game 5’s in their post-season history. The ‘Canes staved off elimination last year in the fifth game against the Rebels as they earned a 5-3 win at the ENMAX Centre.

Most In A While: On Saturday, the Hurricanes exploded for eight goals in an 8-3 triumph over the Rebels in Game 2 of their series. It was the first time the ‘Canes have scored eight goals in a post-season game since they earned an 8-4 win in Game 3 of the first round against the Saskatoon Blades back on March 25th/1992. The most goals ever scored in a playoff game by the Hurricanes is 12, having been done twice.