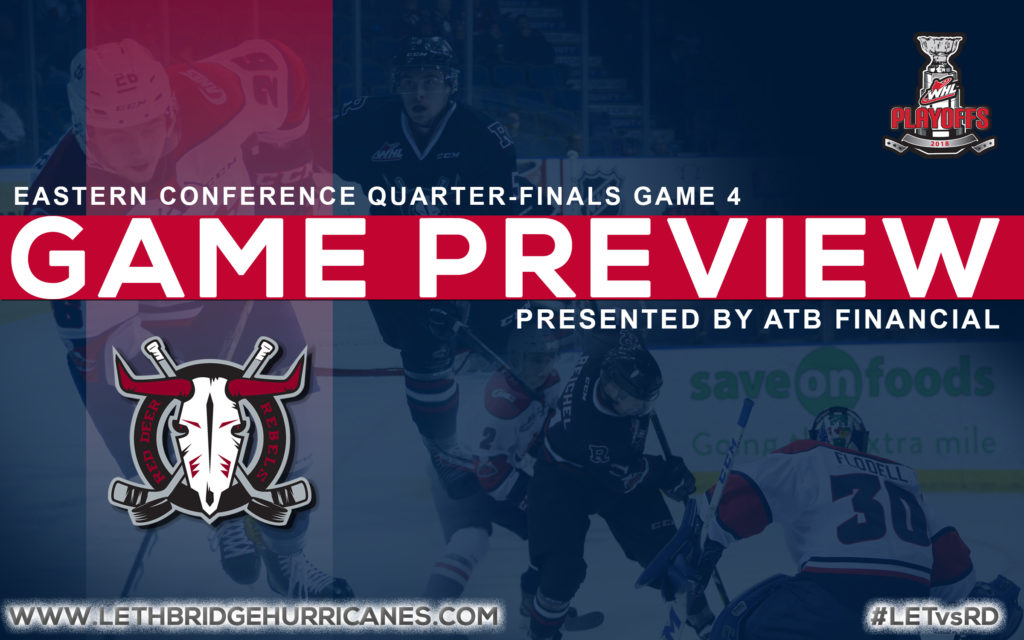 Red Deer, AB – The Lethbridge Hurricanes will look to complete the sweep tonight at 7:00pm in Game 4 of their first round best-of-seven series with the Red Deer Rebels.

The Hurricanes own a 3-0 series lead after earning a 5-4 overtime win last night in Game 3 at the ENMAX Centrium. Calen Addison scored the overtime winning goal just 38 seconds into the extra frame. Taylor Ross, Zach Cox, Brad Morrison and Jordy Bellerive scored in regulation while Logan Flodell made 25 saves. The ‘Canes were 3/5 on the power play while 4/5 on the penalty kill.

The Rebels will look to try and keep their season alive as they will face elimination for the first time in the post-season. Kristian Reichel scored twice while Brandon Hagel and Grayson Pawlenchuk scored the others in the losing cause.

Tonight’s game can be heard on 106.7 ROCK or watched at either Browns Socialhouse location in Lethbridge.

PLAYOFF SERIES: Tonight will be Game 4 of the best-of-seven first round series between the Hurricanes and the Rebels. The Hurricanes hold a 3-0 series lead. It is the second straight season that the two teams have met in the opening round of the post-season.