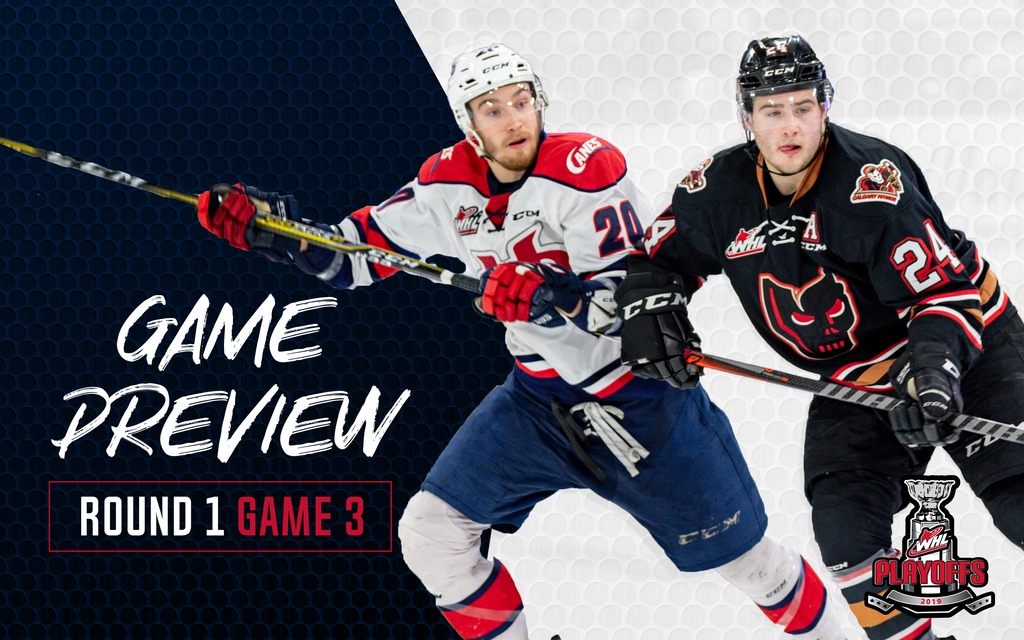 Calgary, AB – The Lethbridge Hurricanes visit the Calgary Hitmen tonight at Scotiabank Saddledome in Game 3 of their best-of-seven first round series that the ‘Canes lead 2-0.

The Hurricanes earned a 4-1 win in Game 2 on Saturday at the ENMAX Centre. Jake Leschyshyn scored his first ever WHL Playoff hat-trick in the victory while Nick Henry potted the other in the win. Carl Tetachuk made 32 saves in the win. Lethbridge has won 10-straight games dating back to the regular season and 13 of their last 14 games overall.

The Hitmen’s lone goal came off the stick of defenseman Dakota Krebs in the third period. Goaltender Jack McNaughton made 28 saves in the defeat as Calgary went 0/7 with the power play in the game. Calgary has lost six straight games dating back to the regular season while having been downed in each of their last nine post-season games dating back to 2016.

Tonight will be the third game of the best-of-seven series. The game will be aired at Browns Socialhouse locations in Lethbridge starting at 7:00pm while 106.7 ROCK will carry the game live starting at 6:40pm with the pre-game show.

PLAYOFF SERIES: Tonight will be Game 3 of the best-of-seven first round series between the Hurricanes and the Hitmen. The Hurricanes lead the series 2-0. It’s the first time the two teams will face-off in the WHL Playoffs since 2009 while it will be the fifth time overall the ‘Canes will face the Hitmen in the post-season.

Game 3’s: Lethbridge has posted an all-time record of 17-19 in Game 3’s in their WHL post-season history. The ‘Canes won two of the three Game 2’s in the WHL Playoffs last year with wins over the Red Deer Rebels in the first round and the Swift Current Broncos in the East Final.