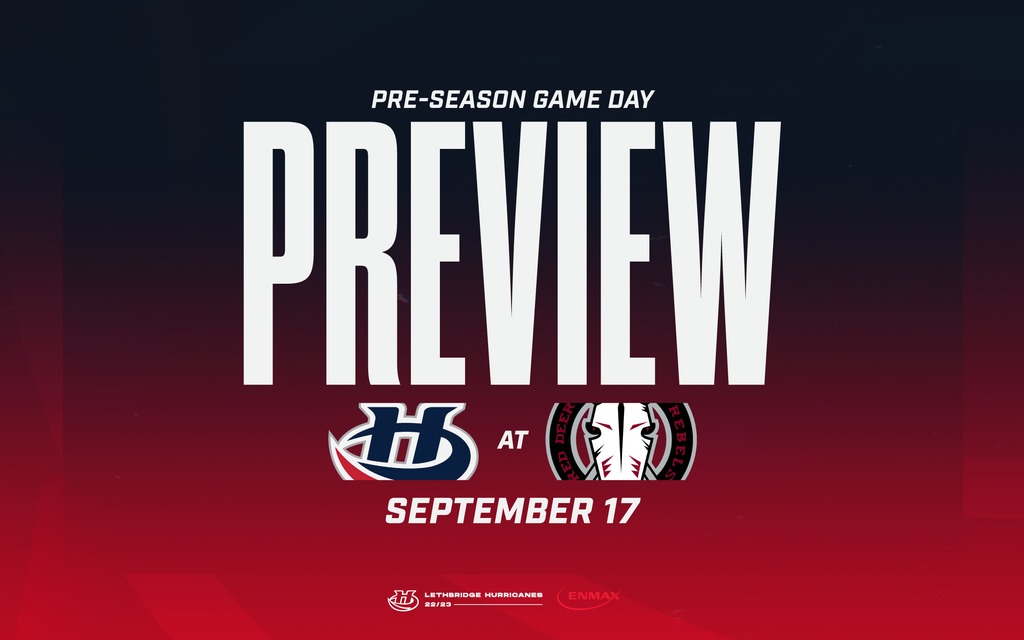 Lethbridge, AB – The Lethbridge Hurricanes will wrap up their 2022 ENMAX Pre-Season tonight at 7:00pm when they visit the Red Deer Rebels at Peavey Mart Centrium in the second of a back-to-back.

The Hurricanes (2-0-1-0) enter after earning a 3-1 victory over the Rebels on Friday night at the ENMAX Centre. Logan Wormald and Miguel Marques each had a goal and an assist in the game while Jett Jones scored the other Lethbridge tally. Jared Picklyk was superb in net stopping 29 of 30 Red Deer shots to improve the ‘Canes record to 2-0-0-0 at home in the pre-season.

The Rebels (0-3-0-0) were downed for the third straight time in the exhibition season with the 3-1 defeat in Lethbridge on Friday. Defenceman Blake Gustafson scored the lone Rebel goal in the game while netminder Rhett Stoesser made 17 saves in the loss. Red Deer is 0-1-0-0 at home in the pre-season.

Tonight will be the second of a back-to-back set to end the 2022 pre-season between the Hurricanes and Rebels, who will meet six times in the regular season. The game tonight can be watched on WHL Live starting at 7:00pm.

VS. REBELS: Tonight will be the second of a back-to-back pre-season set between the Hurricanes and the Rebels at the ENMAX Centre. The Hurricanes earned a 3-1 win in the first meeting on Friday. Lethbridge posted a 3-3-2-0 record against Red Deer during the regular season in 2021-2022. The two teams will meet six times in the regular season this coming season.

Off-Season Moves: Over the off-season, the ‘Canes made a collection of trades, including the acquisition of 2002-born forward Cole Carrier from the Regina Pats in exchange for a sixth-round draft pick in 2023. Carrier appeared in 65 games in 2021-2022 with the Pats totaling 27 points (15g-12a). The ‘Canes also traded forward Reid MacKay and Briley Wood and defenceman Easton Kovacs for draft picks.

Overage Quartet: The Hurricanes will enter the 2022-2023 season with four overage players on their roster as a result of a lower-body injury to goaltender Bryan Thomson. In addition to Thomson, the ‘Canes also have forwards Jett Jones, Alex Thacker and Cole Carrier on their roster.

Fresh Ink: The ‘Canes recently signed 2006-born defenceman Kale Tipler to a WHL Standard Player Agreement. The Edgerton, AB product was a sixth-round (122nd overall) pick in the 2021 WHL Prospects Draft. Tipler will play for the Lloydminster Bobcats U18 AAA team this season.

2007 Group: Lethbridge has re-assigned their four 2007-born players that started the pre-season on the 31-man roster. Will Sharpe, Kash Andresen, Koen Cleaver and Carsen Adair, who were all drafted in the 2022 WHL Prospects Draft, each appeared in one exhibition game before being re-assigned to U18.

AA: Hurricanes have added European forward Anton Astashevich. The Belarus-born forward spent the 2021-2022 season with the Calgary Hitmen totaling seven points (2g-5a) in 45 regular season games. Astashevich will be the only import on the Hurricanes roster. He has two points (1g-1a) in two pre-season games so far.