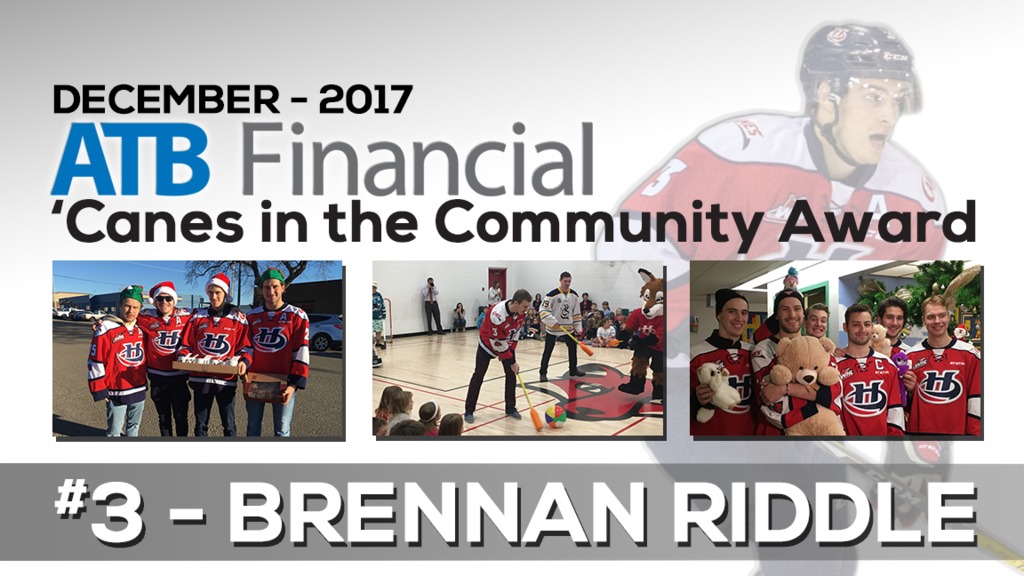 Lethbridge, AB – The Lethbridge Hurricanes Hockey Club, in partnership with ATB Financial, have named Brennan Riddle the recipient of the ATB Cane in the Community Award for the month of December.

Riddle, 20, made an appearance at Fleetwood Bawden Elementary school in early December and played floor hockey in front of a packed gymnasium along with teammate Brady Pouteau and Hurricanes mascot Cane. Riddle was a part of the inaugural ‘Canes Coffee Crew’ delivery as he was one of four Hurricanes players to deliver ‘Canes cups with pastries to 106.7 ROCK, the Lethbridge Chamber of Commerce and the Lethbridge Herald.

Riddle was also one of six players helped deliver teddy bears to the Chinook Regional Hospital’s Pediatric Ward while visiting sick children. To close out December, Riddle helped tutor young hockey players on New Year’s Eve at the ENMAX Centre in the Davis GMC Buick ‘Train Like A Hurricane’ program.

So far this season, Riddle has appeared in 34 games collecting six points (1g-5a) along with 32 penalty minutes. Last season, the product of Balgonie, Saskatchewan skated in 68 games registering a career-high 18 points (4g-14a) with 55 penalty minutes and a plus-6 rating. He added four points in 20 post-season games last year.

Previous winners of the ATB Cane in the Community Award include:

The Hurricanes return to action tonight as they begin a four game homestand against the Kootenay Ice at the ENMAX Centre. Tickets for the game can be purchased online, by calling 403-329-SEAT (7328) or by visiting the ENMAX Centre Ticket Centre.