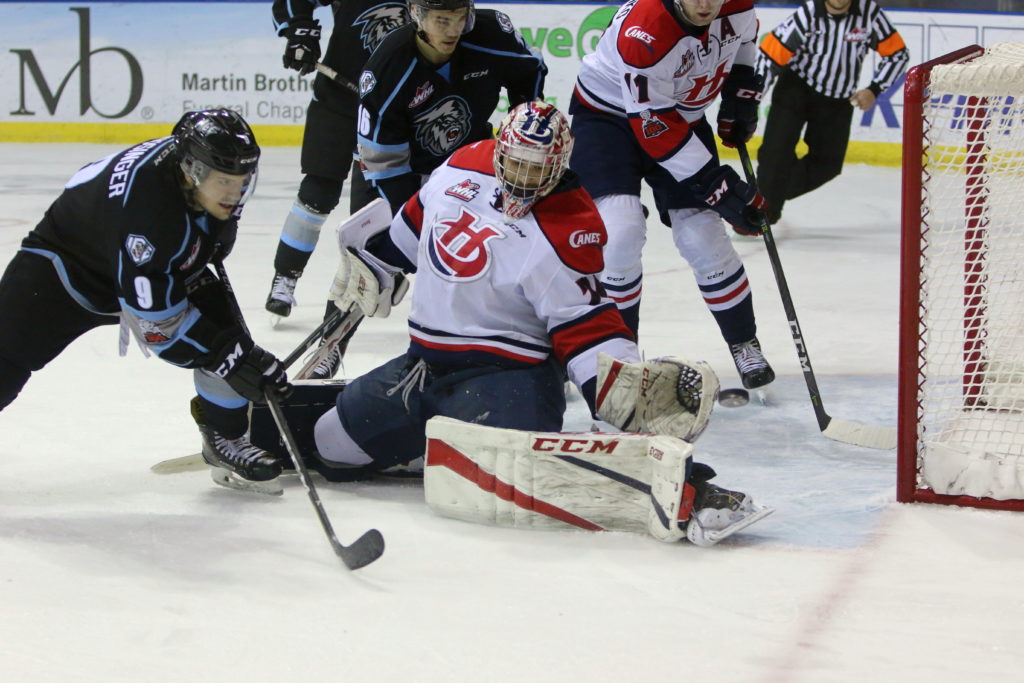 The ‘Canes and Ice traded chances in an even first period. Kootenay had the first great chance just 2:18 into the game as Cameron Hausinger found himself alone in front but Skinner made a big glove save for his first of 20 saves on the night. The ‘Canes broke the scoreless deadlock with just 5.2 seconds left in the opening frame as Jordy Bellerive potted a five-on-three power play goal to make it 1-0 Lethbridge. Shots were even in the first period at 7-7.

The ‘Canes outshot the Ice 15-7 in the second period and built on their lead. Giorgio Estephan, who finished the night with four points, buried another power play goal 8:43 into the middle frame to make it 2-0. Calen Addison appeared to make it 3-0, but the goal was disallowed as Ice goaltender Duncan McGovern was interfered with as the game stayed a two goal lead for the Hurricanes. Before the period was out, Jadon Joseph scored his fourth of the season with 52 seconds left to give the ‘Canes a 3-0 lead at the second break.

In the third, the ‘Canes blew things opening tallying three times in a span of 1:59. Bellerive redirected an Igor Merezhko point shot passed McGovern at the 3:43 mark to make it 4-0. Taylor Ross buried a rebound just 53 seconds after to before Zach Cox scored his first WHL goal just 1:06 later. The ‘Canes converted once more as Lane Zablocki scored his second as a ‘Cane and 11th of the season at the 10:50 mark to help the ‘Canes to the 7-0 blanking.

For Skinner, he now sits alone with ten career shutouts, the most by any Hurricanes goaltender in franchise history. Skinner now has four shutouts this season, second in the WHL only to Carter Hart.

The ‘Canes continue their four game homestand on Friday and Saturday when the Vancouver Giants and Calgary Hitmen come to town. Tickets for both weekend games can be purchased online, by calling 403-329-SEAT (7328) or by visiting the ENMAX Centre Ticket Centre.