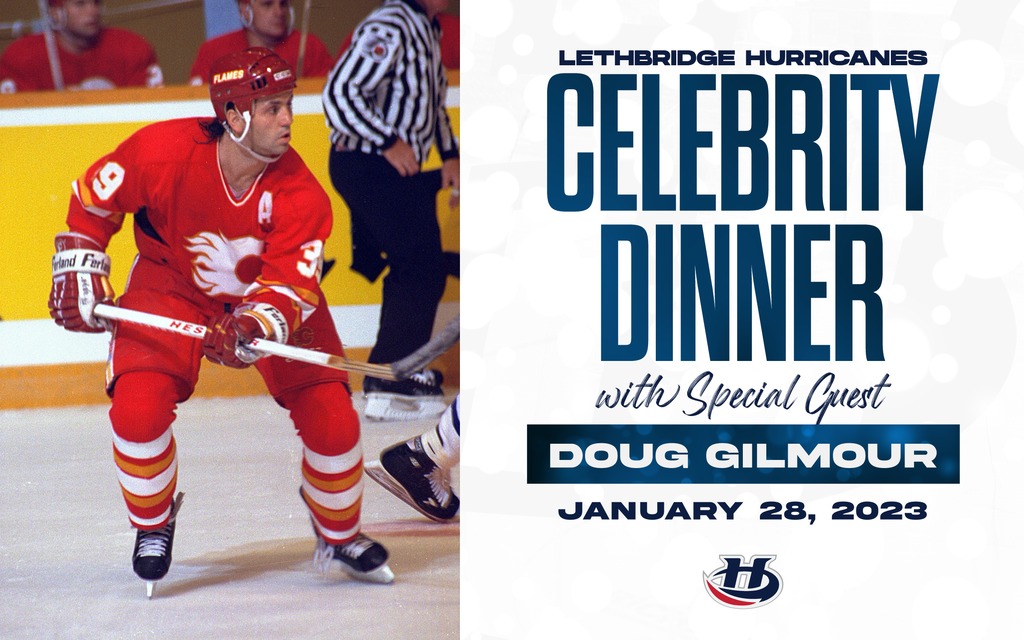 LETHBRIDGE, AB – The Lethbridge Hurricanes Hockey Club is excited to announce that former NHL-er, Doug Gilmour will be this year’s special guest at the Hurricanes Celebrity Sports Dinner. The dinner is set to take place on Saturday, January 28th, 2023 at Sandman Signature Lethbridge Lodge.

In his 1,474 NHL appearances, Gilmour racked up 1,414 points (450G, 964A) and 1,301 penalty minutes. He was a member of the 1989 Stanley Cup championship team with the Calgary Flames and has won the Frank J. Selke Trophy as the NHL’s best defensive forward in 1992-1993. He has represented Canada three times on the international stage and was a member of the 1987 Canada Cup championship team. In 2011, Gilmour was inducted into both the Hockey Hall of Fame and the Ontario Sports Hall of Fame; his number 93 has since been retired by the Toronto Maple Leafs.

The evening will begin at 6:00PM with cocktails while the program will commence at 7:00PM. The night will include a silent and live auction. Tickets for the event are now on sale and are $1,250 for a table of 10 or $150 per person. In addition, there will be a special VIP Reception held with Gilmour for an addition $50 per person. Limited seats are available for the reception and you must have a ticket to the dinner to be eligible to purchase a ticket for the VIP Reception. For more information on tickets, along with sponsorship opportunities, and auction donations please contact Tamara, Dylan, or Kathy at 403-328-1986.