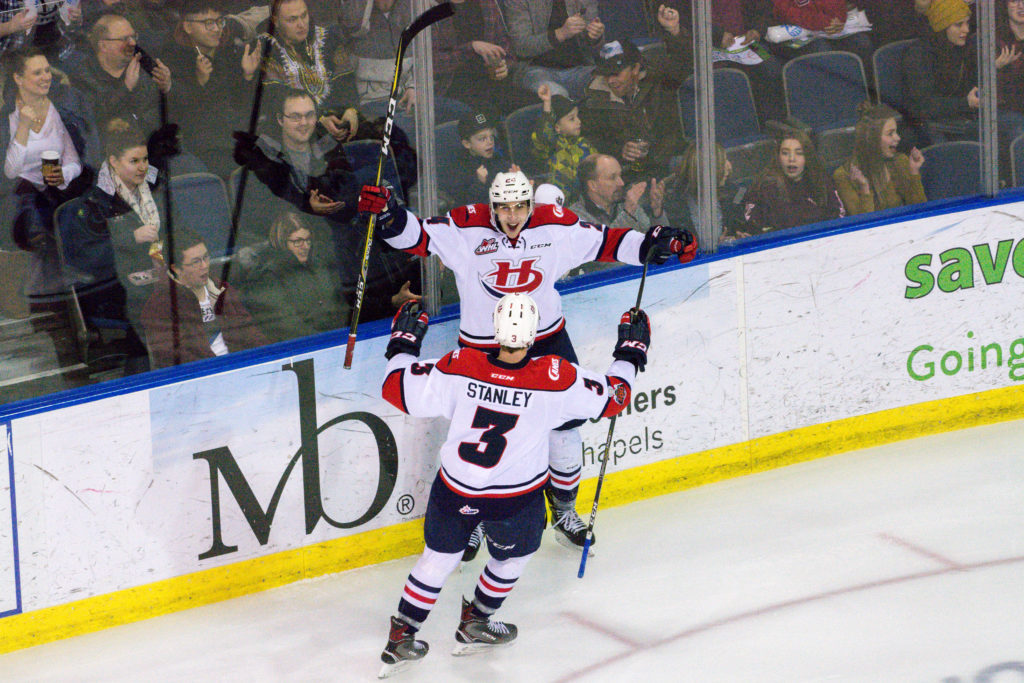 Lethbridge, AB – The Lethbridge Hurricanes began a three-in-three weekend on Friday with a 5-4 victory over the Saskatoon Blades in front of 4,918 at the ENMAX Centre.

The Hurricanes came out guns-blazing as they would strike just 18 seconds into the game as Jordy Bellerive ripped home his team-leading 39th goal of the season beating Blades goaltender Tyler Brown over the glove side to make it an early 1-0 lead; Brad Morrison and Igor Merezhko picked up the helpers on the goal. The ‘Canes struck again just 1:01 later as Dylan Cozens snapped home his 17th of the year making it 2-0 Lethbridge just 1:19 into the game. At the 4:47 mark, Matthew Stanley jumped into the rush and blasted home his first career goal to make it 3-0; Cozens and Taylor Ross drew the assists.

Brown, who started for the Blades, was replaced for Nolan Maier after surrendering three goals on six shots to start the game. Just 15 seconds after the Stanley goal, Calen Addison buried his eighth of the season beating Maier on the first shot he faced to make it 4-0 just 5:02 into the hockey game; for Addison it snapped a 24-game goalless drought. Saskatoon answered back at the 11:19 mark as Logan Christensen snapped home his fourth of the year to make it 4-1. Fiala picked up his sixth of the year just 2:30 later to make it 4-2 before the end of the first period.

After a scoreless second period, the Blades jumped on the ‘Canes early in the third as they netted a power play goal just 47 seconds into the period to make it a 4-3 score as Eric Florchuk redirected home his 12th of the year from Kirby Dach. The ‘Canes responded less than five minutes later as Stanley jumped into the rush and beat Maier for his second of the night to make it 5-3 Lethbridge; Jake Elmer picked up the lone helper. The Blades rounded out the scoring as Braylon Shmyr stuffed one home with just 6.7 seconds left in third period as the ‘Canes went on to a 5-4 win.

The ‘Canes were outshot 39-19 in the hockey game. Lethbridge was 0/2 with the power play and 3/4 with the penalty kill.

The Hurricanes continue their busy weekend on Saturday when they welcome the Kootenay Ice on Country 95 ‘Country Night’ at the ENMAX Centre. Tickets are available online, by calling 403-329-SEAT (7328) or by visiting the ENMAX Centre Ticket Centre.