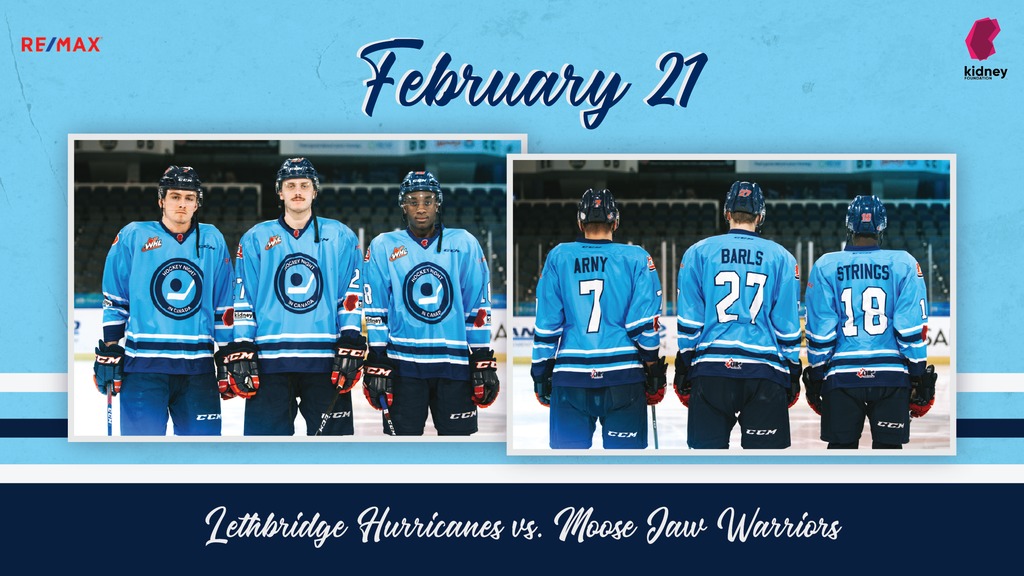 This Friday, February 21, 2020, the Lethbridge Hurricanes will host one of 17 charitable games in the series, RE/MAX presents: WHL Suits Up to Promote Organ Donation. Through the first two years of the event more than $460,000 has been raised for The Kidney Foundation of Canada. The game will focus on bringing organ donation and transplantation into the spotlight by, featuring a local organ donation representative at the puck drop, providing information on the importance of organ donation and more. This year’s puck droppers will be Jenn Suggitt, the wife of deceased organ donor Ric Suggitt, and their three children.

(Lethbridge, AB) It was an ordinary summer day when Jenn Suggitt received a call from her 12-year-old daughter Gabby saying something was wrong with her dad. Ric Suggitt was driving Gabby to swim club when he grabbed his head and pulled over, veering onto the sidewalk, saying, “I’m so sorry, call your mom.” An ambulance rushed the 58-year-old initially to the ER in Lethbridge, and then to Calgary, with Jenn and their three children, Rhyannon, Gabby, and Everett following closely behind. “The minute we arrived, they took us to one of those rooms, told us he had had a brain hemorrhage, and there was no activity left in his brain,” says Jenn Suggitt, wiping away tears.

Although he had not formally registered to be a donor, Ric, Jenn and the kids had recently discussed organ donation over breakfast. After checking with Ric’s family, Jenn sat down with her kids. “Dad isn’t going to make it,” she said. “But we have an opportunity to save someone else’s life.”

Then, less than a year later, another tragic loss: on April 6, 2018, the Humboldt bus tragedy claimed the lives of 16, including 21-year-old Logan Boulet, a close family friend of the Suggitt’s. Ric, a prominent rugby coach in Lethbridge, was Logan’s trainer and mentor. Inspired by Ric, Logan had signed his donor card just before the Humboldt crash and told his dad he wanted to be an organ donor. Logan’s donation saved six lives and inspired thousands of Canadians to register as organ donors in a tsunami of support, now known as the “Logan Boulet Effect.” “This one small thing that we did,” says Jenn. “We never foresaw how big it has become – a miracle and a tragedy all at the same time.”

“It is a privilege to gather for this inspirational game to honour Ric and Logan,” says Joyce Van Deurzen, Executive Director, Kidney Foundation (Southern Alberta & Saskatchewan). “They will be in our hearts as we stand with the Suggitt family to advance the cause of organ donation. We are deeply grateful for their courage in the face of such a profound loss.”

The Kidney Foundation encourages everyone to take the time to talk with their family about organ donation. Even more important than registering to donate, have that talk. “The Western Hockey League is very proud to continue working alongside our longstanding partner RE/MAX of Western Canada to help generate further support for the Kidney Foundation,” commented WHL Commissioner Ron Robison. “We are excited to celebrate the history of Hockey Night in Canada, Coach’s Corner, as well as raising awareness of the Logan Boulet Effect in this year’s edition of WHL Suits Up to Promote Organ Donation.”

Players will wear special helmet decals to create awareness for “Green Shirt Day” and Hockey Night in Canada-themed jerseys. One thousand fans at the game will receive a signature Hockey Night in Canada bobblehead. The Kidney Foundation invites fans to visit its booth for organ donation information and to support organ donation initiatives with a donation for a limited-edition Logan Boulet wristband and hockey card. Raffle tickets will also be sold to win a Hurricanes jersey signed by Don Cherry. There will also be an online auction of the players’ themed jerseys announced at the start of the game and posted to https://lethbridgehurricanes.com. The auction will run Friday, February 21 at 7:00 pm to Thursday, February 27 at 8:00 pm (mountain time).

Fans are encouraged to wear green at the game in honour of the “Logan Boulet Effect” and to raise awareness for the upcoming “Green Shirt Day” on April 7, 2020. They can also wear retro clothing to celebrate the long-standing partnership with Hockey Night in Canada.

Tickets for Friday’s game are available online at http://bit.ly/1920tickets by calling 403.329.SEAT (7328) or by visiting the ENMAX Centre Ticket Centre.