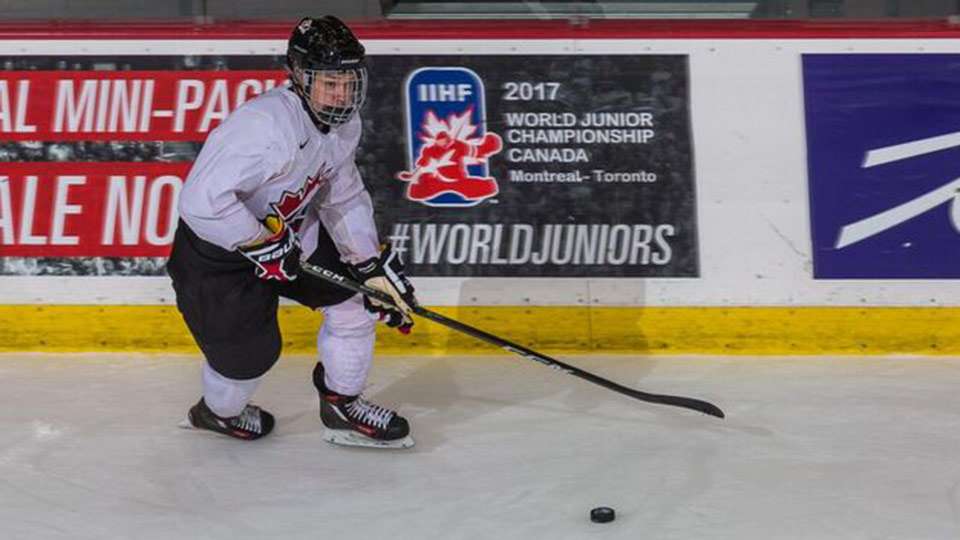 Canadian hockey parents should start phoning Gerry and Heather Bellerive to find out what their secret is.

After watching eldest son Matt represent Pacific at the 2011 World Under-17 Hockey Challenge, daughter Brielle win gold at the 2014 IIHF U18 Women’s World Championship, and youngest son Jordy play for Canada Red at the U17 tournament last November, they might have some insight to share.

Whether it comes from English Bay, or all the way up from Capilano Lake, there definitely seems to be something special in the water at the family’s North Vancouver, B.C., home.

With his two older siblings having enjoyed success on international ice, the latest member of the family to don the red and white of Team Canada – he’s got another chance at Canada’s National Men’s Summer Under-18 Team selection camp – can only benefit from following in their footsteps.

Bellerive has played the ‘little brother’ role to perfection, listening to advice from Matt and Brielle that he hopes will help lead to a trip to the Czech Republic and Slovakia and the U18 Ivan Hlinka Memorial Cup.

“My brother and sister are the people I look up to the most in hockey,” he says. “Having them go through the programs before me gives me an idea of what I’ll need to do to make it.

“They let me know that Hockey Canada camps are really competitive. That you just have to play your game and not let the scouting and everything there get in your head. It’s about doing your own thing and being your own kind of player.”

While watching his siblings go through similar experiences before him and getting valuable advice from them certainly is helpful, it was unconsciously that Jordy began following in their footsteps.

From a young age he was consumed by the game of hockey and followed his family to rinks across British Columbia. He’d soak in every moment he could and learned to embrace the game.

Early on, he witnessed what his brother and sister were going through and not only wanted to keep up with his siblings and do what they had done, but to do more, and do it better.

“Jordy understood more about the game by the age of 10 than I’d say most adults do,” says Gerry Bellerive, the family patriarch. “He’s seen the first two [children] go through their trials, tribulations and successes and that fueled his inner drive.

“He has that steel-trap of a mind – he’s incredibly resilient mentally – and that allowed him to always be competitive, but more in a way that he was inspired by them.”

While Gerry acknowledges that he and his wife Heather have made sacrifices to allow their children to get to where they are today, he gives them all the credit for their passion, and for working hard to reach their goals.

As he gets the opportunity to face off against the best U18 players the country has to offer, Bellerive is comfortable knowing there’s no challenge he isn’t prepared for.

After all, competition in the Bellerive house was as common as Sunday dinner.

“Whether it was shooting pucks, or battling in the basement or on the trampoline, everything has been competition from day one,” Jordy says. “We competed all the time so it made things interesting and a lot of fun growing up.

“We have a great work ethic in my family and we feed off each other. That’s something that has given us a chance to excel through hockey and given us all a chance to wear the Maple Leaf.”

With Matt owning a bronze medal from the World Under-17 Hockey Challenge and Brielle a world champion, Jordy is eager to get his shot at a little bit of international hardware.

And while cracking the Canadian roster is job one, Bellerive isn’t shy about his golden goals.

“I think once you put the skates on, [winning a gold medal], and winning a Stanley Cup is always in the back of your mind. It’d be a huge honour, so I’m going to do all I can to get it for me and my family.”