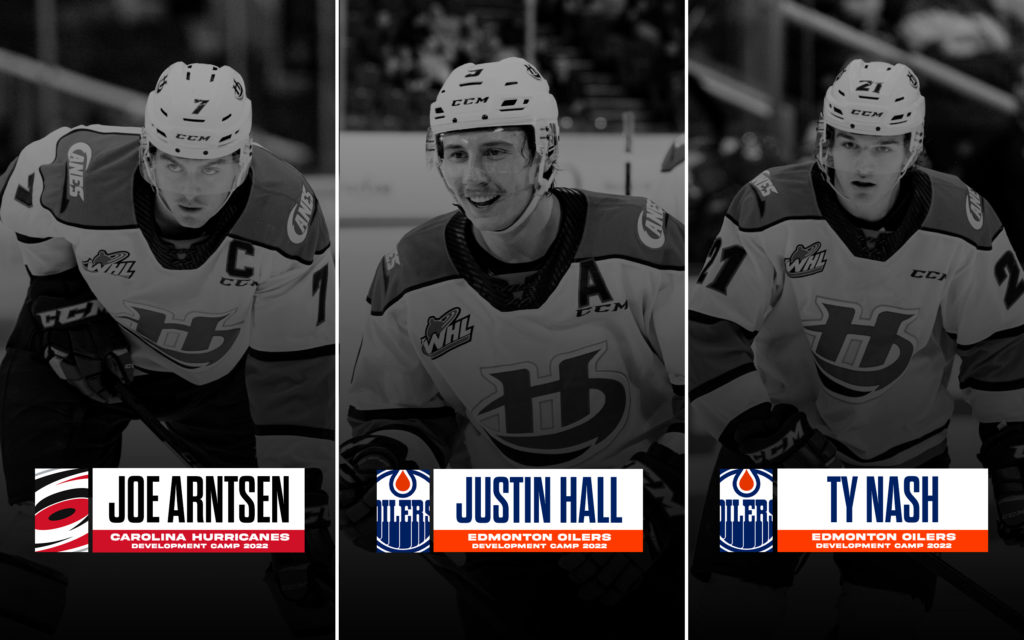 Co-Captain Joe Arntsen, 19 will be at the Carolina Hurricanes Development Camp that opened today and runs through July 14 at Invisalign Arena in Morrisville, North Carolina. Arntsen tallied 37 points (8g-29a) to go along with his 97 penalty minutes in 68 games during the 2021-2022 season, a career year for the Dinsmore, SK product. Over four seasons with the club, he recorded 47 points (10g-37a) in 134 games and 156 penalty minutes.

Hall, 21 and Nash, 19, will both attend the Edmonton Oilers camp. Nash was drafted by the Hurricanes in the ninth round (183rd overall) in the 2018 WHL Prospects Draft but was undrafted in the NHL Entry Draft last summer during his first year of eligibility. The product of Scottsdale, Arizona totalled 38 points (17g-21a) along with 40 penalty minutes in 60 outings with the Hurricanes during the 2021-2022 season and was named the co-recipient of the Herman Elfring Community Relations Award and the ENMAX Corporation Hardest Working Hurricane Award. In three seasons with the ‘Canes, Nash has collected 66 points (27g-39a) along with 73 penalty minutes in 143 games.

Hall led the Hurricanes in scoring in the 2021-2022 season posting career highs in his final year with the Hurricanes, racking up 74 points (34g-40a) in 62 games, to go along with his 24 penalty minutes. From Edmonton, AB Hall collected 146 points (62g-84a) and 57 penalty minutes in 188 games over four seasons with the ‘Canes. To cap off his career year, Hall was named the 106.7 ROCK Three Star Award recipient, the Canadian Tire South Top Scorer, and took home the Harry Ingarfield Memorial Award  as the Most Valuable Player.

From Edmonton, this will be an extra special opportunity for the Hall family who will also see Justin’s twin brother, and ‘Canes alumnus, Adam Hall (2018-2020) at camp in their hometown. They, along with Nash will reconnect with alumnus, Dino Kambeitz (2019-2021) at the Oilers Development Camp taking place this week in Edmonton.

Invited by the Colorado Avalanche, Hurricanes alumnus Alex Cotton will be at the reigning Stanley Cup Champions’ Development Camp this week. Cotton was drafted by the Hurricanes in the 2016 WHL Prospect Draft in the fifth round (99th overall) and played parts of five season in Lethbridge before being dealt to the Vancouver Giants early in the 2021-2022 season. He was originally drafted by the Detroit Red Wings in the fifth round (132nd overall) in the 2020 NHL Entry Draft and attended their development camp in 2021.

The Hurricanes will host two ENMAX Pre-Season games; Friday, September 9th against the Medicine Hat Tigers and Friday, September 16th against the Red Deer Rebels. Both games will be played at ENMAX Centre with a portion of ticket sales going to Lethbridge Minor Hockey. Ticket details for the ENMAX Pre-Season games will be announced at a later date.

The Hurricanes will open the regular season on Friday, September 30th at ENMAX Centre with the Dairy Queen Home Opener when they welcome the Medicine Hat Tigers at 7:00pm. Regular Season individual game tickets go on sale on Thursday, September 15th at 10:00am.

Season Tickets are still available with the loyalty pricing deadline this Friday, July 15th at 4:00pm. Ticket holders can pay in full or select a four-pay payment plan option. Season tickets can be renewed online at https://lethbridgehurricanes.com/2223seasontickets. For more information or questions, please contact the Hurricanes Office at 403-328-1986.