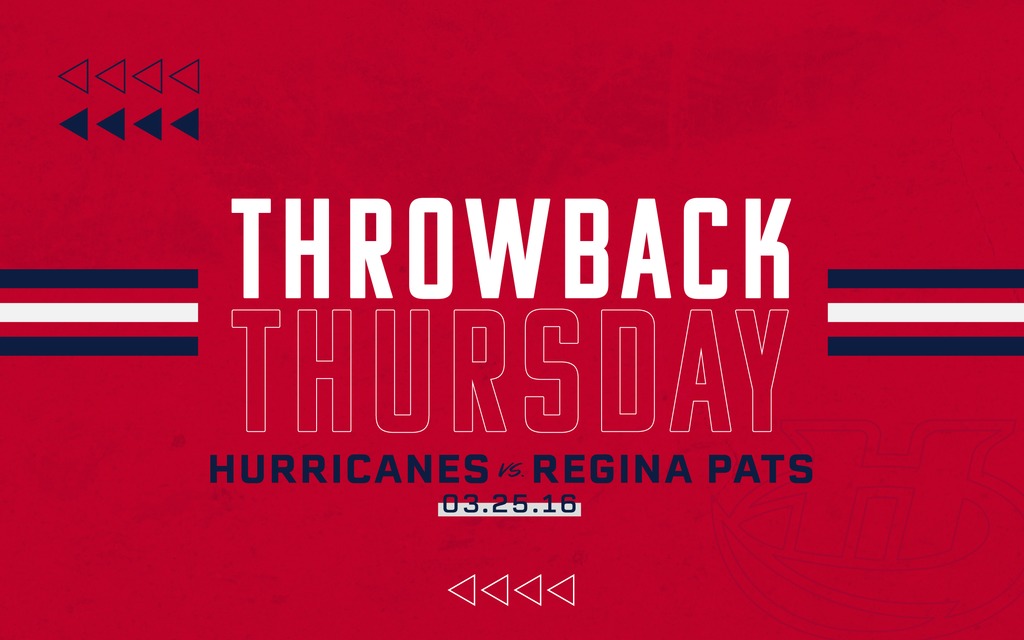 Relive the electrifying moment at the ENMAX Centre when playoff hockey returned to Lethbridge in 2016!

The Lethbridge Hurricanes begin the 2016 WHL Playoffs in Game 1 of their first-round best-of-seven series with the Regina Pats at 7:00pm at the ENMAX Centre.

It’s the first time since 2008-2009 that the Hurricanes will appear in the WHL post-season. The Hurricanes haven’t appeared in a playoff game since April 8, 2009 when they were eliminated by the Calgary Hitmen in a second-round series. Their last playoff win was Game 7 of a first-round series with the Saskatoon Blades on April 1, 2009.

The Regina Pats finished the regular season with a 36-28-3-5 while finishing in the first Eastern Conference Wild Card position. It is the third consecutive year that the Pats have qualified for the post-season having reached at least 80 points in each of those years.

The Hurricanes and Pats met four times during the regular season with the Hurricanes posting a 1-2-0-1 record against Regina. The ‘Canes won the first meeting of the season back on October 14th by a 6-4 score but dropped the next three head-to-head battles. The two teams combined for a whopping 46 goals in the four contests; the Hurricanes averaged 5.50 goals per game while the Pats averaged 6.00 per game.

Playoffs!?: The Hurricanes officially clinched a playoff spot on February 17th. It’s the first time since 2008-2009, a span of six years, that the ‘Canes qualified for playoffs. The last time the Hurricanes played a post-season game was April 8th, 2009. A span of 2,543 days between playoff games.

Lucky 45: On March 11th, the Hurricanes earned their 45th victory of the season; it’s just the fifth time in franchise history the Hurricanes have reached the 45-win plateau and the first time since 2007-2008 that they have accomplished that feat. The Hurricanes finished with 46 victories this season, their most since the 1996-1997 Championship season. Each time the ‘Canes hit the 45-win plateau they went to the WHL Final.

Oh, My Burke: Second-year forward Brayden Burke was ranked #68 on the NHL Central Scouting’s midterm rankings. Burke reached the 100-point plateau on March 4th in Saskatoon and finished the year with 109 points (27g-82a). He’s the first ‘Cane to reach the century mark since 2002-2003 when Jeremy Jackson had 102 points. He finished with the third-most assists (82) in one season by a Hurricane in franchise history.

Sniping Skinner: On March 18th, Stuart Skinner scored an empty-net goal against the Medicine Hat Tigers becoming the first Hurricanes’ goaltender to accomplish the feat. He was just the seventh WHL goalie in history to score a goal. The moment capped off a terrific season by the sophomore who finished his second WHL campaign with a 27-10-1-0 record with a 2.73 GAA and a .920 SV% and three shutouts.

Offense from the Defense: Maple Leafs signed prospect, Andrew Nielsen, finished third in defenseman scoring with 70 points (18g-52a) in 71 games this year. He is just the third ‘Canes d-man in franchise history to reach the 70-point mark and the first since 1993-1994 joining Shane Peacock and Darcy Werenka as the only others. Peacock holds the single-season record when he scored 102 points (27g-75a) in 1992-1993.