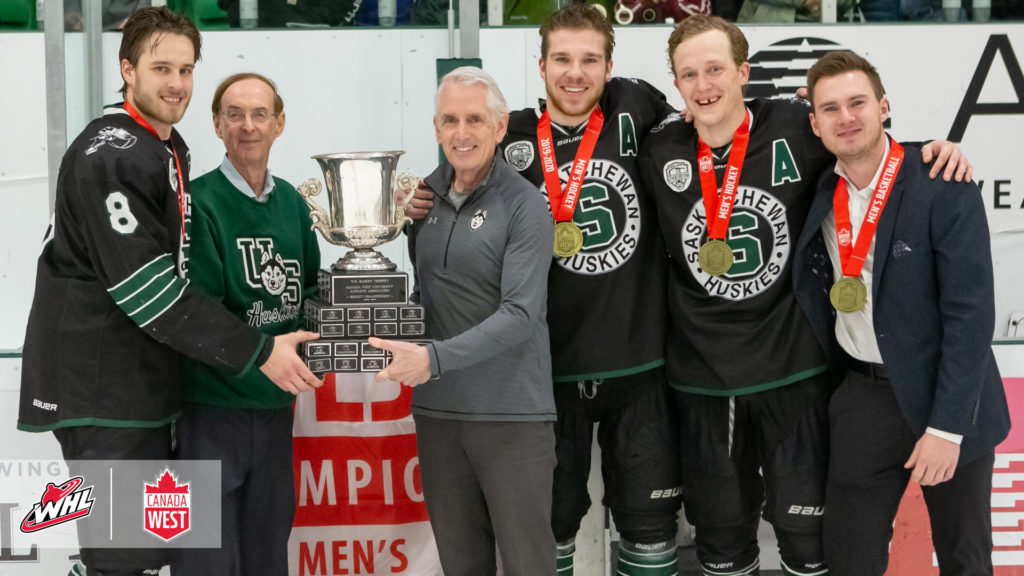 Saskatoon, Sask. – For the first time since 2016 the University of Saskatchewan Huskies men’s hockey team is the best in the west, as they defeated the UBC Thunderbirds 3-1 in Game 2 of the Canada West Final to record the series sweep in front of a crowd of a sold-out crowd of 2,667 at Merlis Belsher Place.

Saskatchewan’s 3-0 victory in Game 1 allowed them to enter Saturday night with a chance to close out the series, and they did just that. The Huskies carried their momentum over and took care of business with the win, allowing them to hoist the Dr. W.G. Hardy Trophy on home ice.

“It was pretty special to win at home,” said Huskies head coach Dave Adolph. “I think the players really appreciate it. For the last two years, it’s been pretty special the type of support we’ve got, and I think it’s something that’s just getting started. This is going to be a pretty good place to play for a lot of players in the coming years.”

After winning five conference titles at Rutherford Rink, the 11th Canada West banner in program history is the first in Merlis Belsher Place history, which opened prior to the 2018-19 season.

Saskatchewan hopped out to a quick 2-0 lead before adding a third tally in the second period,and from there the Thunderbirds, who were chasing their first Canada West title in program history, were unable to come back from the early deficit despite Jake Kryski’s goal with 3:16 remaining in regulation.

“Obviously, we’re real disappointed. We came here to win a championship and we fell short. We faced a real hot team,” said Thunderbirds head coach Sven Butchenson. “They’re a veteran group that knows how to win games. Hopefully, we saved our best for nationals.”

Levi Cable’s two goals were the difference in the contest, as the fifth-year forward recorded both the game-winner and the insurance marker to seal the championship for Saskatchewan, while former Everett Silvertip standout Carson Stadnyk scored his third goal in the past three games.

Former Seattle Thunderbirds netminder Taran Kozun, who was named the Canada West Goaltender and Player of the Year this past week, made 18 saves to improve his record to 4-0 in the postseason.

At the opposite end of the ice, Rylan Toth made 26 saves on 29 shots for the UBC, as the third-year netminder, who starred for the Red Deer Rebels and Seattle Thunderbirds, did all he could to keep the visitors in the contest.

The championship, which is Saskatchewan’s first since the 2015-16 campaign, is the first for the entire Huskies roster, except for Kohl Bauml, Cable, Andrew Johnson and Logan McVeigh, who each finished their five-year conference career the way they started it; with a Canada West banner.

“All of our fifth-years, Andrew, Logan, Kohl and Levi have had five special years. These kids have went to the Canada West Final in all five years that they’ve played, and they’ve all had dynamic roles each and every year,” said Adolph. “You live and die by your seniors, I don’t care what sport it is, and ours have been good.”

The Huskies wasted little time to getting the home crowd on their feet. Stadnyk, who had found the net in the team’s last two games dating back to his double-overtime game-winner in Game 2 of the semifinal series against the Dinos, found the back of the net once again to give Saskatchewan an early 1-0 lead.

The Huskies kept it coming as Cable, who joined the program in 2015 after wrapping up a four-year WHL career with the Kootenay Ice, finished off the play after Stadnyk drove hard to the cage, registering his second goal of the postseason and allowing Saskatchewan to take a two-goal leadthrough one period of play.

In a relatively quiet middle frame Saskatchewan was granted a powerplay in the late stages of the second and they took advantage. Layne Young’s shot from the half-wall was stopped by Toth, but the rebound fell onto the doorstep, and Cable made no mistake to make it 3-0 for the home side.

UBC continued to battle throughout the third but weren’t able to solve Kozun until the waning moments of regulation. Kryski, the former Calgary Hitmen standout, was able to beat Kozun to give the visitors a glimmer of hope.

But unfortunately for the Thunderbirds, that was as close as they could come. From there the countdown was on as the Huskies were able to seal the deal on winning the banner on home ice.

The Huskies and Thunderbirds will now turn their attention towards the 2020 University Cup in Halifax, N.S., which runs from Mar. 12-15, as Nova Scotia holds the event for the third time in their provincial history. CBC will have free live coverage of the national championship across its digital platforms.