WHL Firsts: Seven first goals round out the week 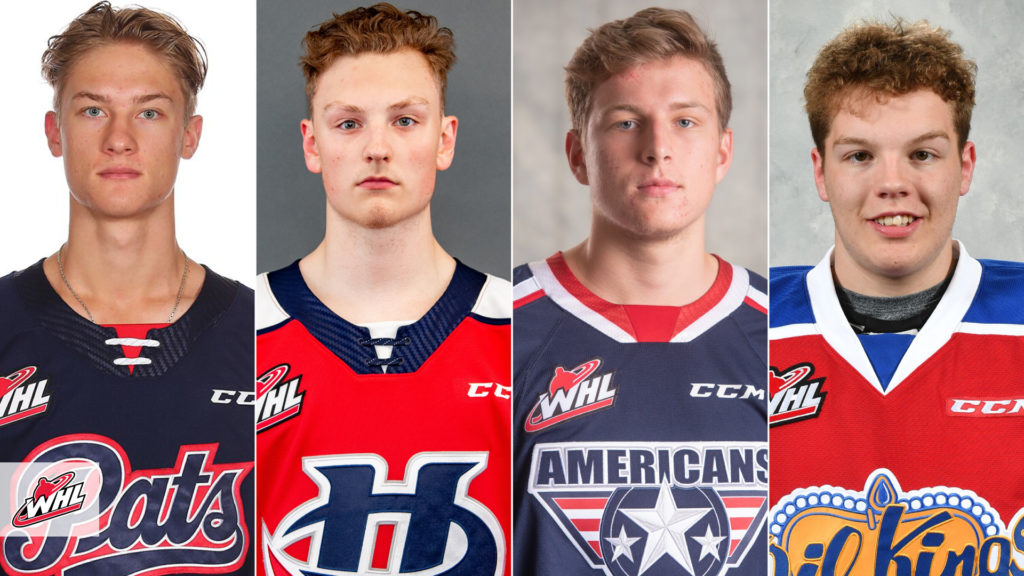 Week Six in the Western Hockey League was lucky with seven players picking up their first goals in the league. This week, the products of Alberta led the way with four players from the province notching their first goals. More players will be looking to find the score board for their teams heading into the third month of the season. The Regina Pats and Tri-City Americans each had a pair of players find the back of the net, leading the way for this week

Starting the week was Drew Englot for the Pats, who scored his first WHL goal against the Prince Albert Raiders. Englot, the product of Candiac, Sask., buried his first goal after the forward sent a snap shot towards the Raiders’ goal. After taking a redirection, the 6-foot-2, 191-pound forward’s shot beat the Raider goaltender at 6:20 of the second period to tie the game for Regina. Although the Pats fell by a final score of 6-2, Englot’s play was a high point for the team. Englot registering four shots and a finishing the game with a plus-one rating.

On Friday, Tri-City hosted U.S. Division rivals, the Seattle Thunderbirds at the Toyota Centre. After the Americans tied the game on a power-play marker from Edge Lambert , defenceman Samuel Stewart gave the hosts a 2-1 lead after a shot from the left circle took a bounce off a Thunderbird stick. The product of Winnipeg, Man. had his shot take a bounce, launching the puck up and over the Thunderbirds goaltender for the goal. The third-year defenceman had a game to remember finishing the night with a plus-two rating and picked up first star of the game honours.

Saturday saw two players pot their first goals in WHL action. First was sophomore forward Alex Thacker from the Lethbridge Hurricanes, who sniped home his first against the hosting Brandon Wheat Kings. After import forward Oliver Okuliar potted his second of the game, Thacker followed up on a rebound shot and put home the game-winning goal for the Hurricanes at 12:14 into the second period. Coming off an eight-goal performance in Winnipeg against the ICE, the Hurricanes closed out the game for their second-straight win.

🚨Thacker adds to the mix🚨

The Americans got their second WHL First of the week on Saturday when the team hosted the Vancouver Giants. Tri-City opened the scoring after 2001-born defenceman Bryan McAndrews found the back of the net. The product of Edmonton, Alta. wristed a shot past the Giants goaltender after receiving a pass from teammate Sasha Mutala at 7:41 of the first period.

On Sunday, the Pats also got their second WHL First of the week after Zack Smith scored his first goal against the visiting Red Deer Rebels. Smith, the winger from Saskatoon, Sask., found the back of the net for the Pats at 14:17 of the second period. The 5-foot-11, 165-pound forward sniped a shot that took a redirection and beat the Rebels goaltender that tied the game at 1-1. Smith was dangerous in only his third match with the team, finishing the contest with three shots and a plus-one rating. He picked up second star of the game honours.

Rebels defenceman, Mason Ward buried his first career goal in the WHL on Tuesday against the hosting Wheat Kings. Ward sniped home his first after receiving a pass from third-year Joel Sexsmith. The 6-foot-4, 194-pound defenceman controlled the pass and launched a shot up over the right shoulder on the Wheaties goaltender, giving the Rebels their second goal of the game.

The Edmonton Oil Kings also had a rookie pot his first career marker against the visiting Raiders. Oil Kings defenceman Keagan Slaney found the back of the net at 5:45 on the third period on a sweet wrist shot from the point, beating a screen and the Raider goaltender for his first goal int the WHL. The Airdrie, Alta. product was one of the best skaters in the game for the Oil Kings and picked up third star of the game honours.