As the 2019-20 Western Hockey League’s regular season approaches, two teams will be previewed each day leading up to the start of the regular season, Friday Sept. 20. Team capsules are presented in order of 2018-19 finish within their own division. Today, we take a look at the Central Division’s Lethbridge Hurricanes.

2019 Playoffs: Lost in Eastern Conference Round One vs. Calgary Hitmen (4-3)

Forwards: Despite several key forward departures for the Lethbridge Hurricanes, there are options for the team to remain an offensive threat while growing for the next generation.

Dylan Cozens’ growth and upward trajectory should see him take on a bigger part of the Hurricanes’ offensive leadership this season. His 84 points (34G-50A) were the most by any skater in a Hurricanes jersey last season. Even with Cozens as a key holdover, Hurricanes General Manager Peter Anholt has his eye on fostering the team’s next generation of talent.

“The big thing for us is that it’s a bit of a transition year,” Anholt said of his club. “After losing most of our leadership core, it really changes how people’s roles change going into this year.”

The Hurricanes’ offence could also be aided by a productive campaign from Logan Barlage, whose 39 points (15G-24A) make him the team’s next highest-scoring returning forward after Cozens. A key piece in a major deal with the Swift Current Broncos in 2018, Anholt acknowledged that Barlage had improved areas of his game that will make him more of a complete package. 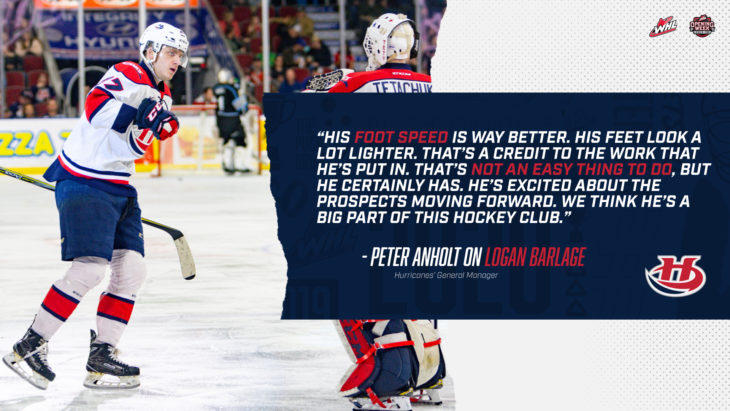 The fourth-overall selection from the 2016 WHL Bantam Draft has a wealth of experience to date with 179 games of WHL regular season and playoff experience combined. An increased role comes with a chance for Barlage to develop his game, enough so that it might get him back on the radar for the NHL Draft in 2020 or 2021.

“Up front, a lot of those younger guys are really going to have to take the ball,” Anholt said. “It’s easy to earmark Cozens and Barlage I think because of their experience, but they’re only 18-years-old.

“They’re good players and we expect them to take a whole different step.”

The team added to their forward depth in the first round of the 2017 and 2018 WHL Bantam Drafts, adding a pair of Albertan talents in Fort Saskatchewan’s Noah Boyko and hometown product Zack Stringer, respectively. While both found different measures of success last season with the Hurricanes, the pair will be a growing part of that next wave of talent in Anholt’s mind, centered firmly around the team’s 2002 and 2003-born groups.

Still, the expectations for the younger forwards will be kept in check by Anholt and the team’s staff.

“The big thing with us is we have to be careful on having too high expectations for him,” Anholt said of Stringer. “I think when you look at Zack Stringer, his hockey sense is so exceptional. He has the ability to play with good players and good players want to play with him.

“That’s a real credit to him.”

The team also added another first-round WHL Bantam Draft pick to their roster in the off-season, acquiring Tyson Phare from the Prince George Cougars. Planning to utilize the Maple Ridge, B.C. product in the team’s forward group, he could prove to be another key addition.

In what could be an underrated move to boost the team’s offence, the addition of Slovakian winger Oliver Okuliar from the 2019 CHL Import Draft should provide a boost to the team’s offence. Okuliar’s first season in North American saw the 2000-born forward post 42 points (14G-28A) in 66 games with the Sherbrooke Phoenix of the Quebec Major Junior Hockey League (QMJHL). He’ll face a number of strong defences within his own division and conference as he transitions to the WHL, but replicating last season’s production in a new campaign for the Hurricanes would be another significant boost. 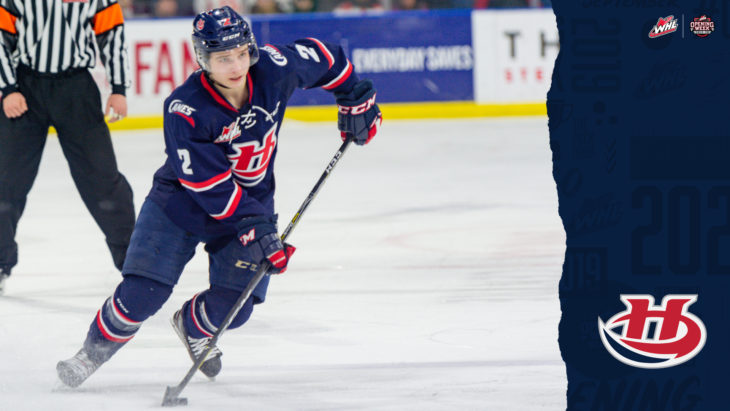 Defence: Starting the season with two overage defenders is the right path to take in the short term. With the team’s core of younger forwards pressing for more ice time and learning greater roles, having reliable presences on the blue line will aid the team over the coming season.

Ty Prefontaine and Koletrane Wilson bring a pair of intimidating 6-foot-4 frames to the top of the team’s defensive structure. While Addison has the offensive element to his game as well, Prefontaine and Wilson may yet benefit from the increased roles, though the pair have tended to utilize their defensive skills first while finding their offensive opportunities where it permits.

At 6-foot-6, the 203-pound import Danila Palivko should add more value in his second full season with the Hurricanes.

Of course, the anchor to the team’s blue line will continue to be Addison for another season. The Brandonite is a rising prospect within the Pittsburgh Penguins’ organization and is a model for consistency. He posted back-to-back seasons of 65 points (11G-54A), matching his totals in the 2017-18 and 2018-19 campaigns. He’s also played a minimum of 63 regular season games in each of the last three campaigns while contributing the the team’s last four runs in the WHL Playoffs.

“Our backend, we’ve got a lot of experience, but all those guys have to take a whole different step,” Anholt said. “Addison should be one of the better defencemen in the league and then we’ve got three 2001-born that really have to take a step.”

Having already appeared in two regular season games, Swift Current, Sask. product Joe Arntsen has already created an impression and could be set to spend his first full WHL season in southern Alberta. As a rookie in the Saskatchewan Midget AAA Hockey League last season, Arntsen posted 15 points (6G-9A) in 39 games with the Swift Current Legionnaires. He also represented his province at the 2019 Canada Winter Games in Red Deer, Alta. and will bring experience to a young role on the team’s blue line.

“Arntsen has been a real nice surprise as far as a 16-year-old,” Anholt said. “He’s a man already. We’re really pleased there.”

As a team that’s operated under the mantra of the best defence being a good offence, the Hurricanes will see a benefit in committing more to the defensive side of the game as competition within the division improves. 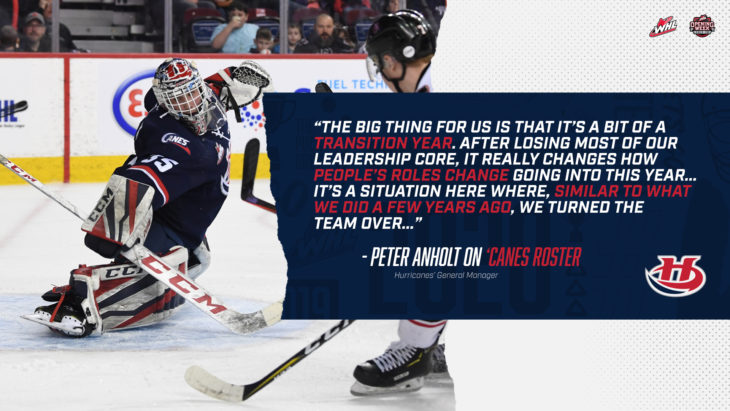 Goal: The 2018-19 season was an unconventional year between the pipes in the Central Division as a plethora of changes took place among the division’s six teams. That was the case in Lethbridge as Carl Tetachuk stepped up in his rookie season to shine and be the team’s backbone.

Appearing in 37 games during the regular season, Tetachuk posted a 24-9-1-1 record with a 2.88 goals-against average, .909 save percentage, and two shutouts. That included winning his final seven games to aid the Hurricanes push down the stretch as they made a bid for the division title. Pretty good for a hometown kid that was passed over in the 2016 WHL Bantam Draft.

In the end, the Hurricanes’ vision of a long playoff run wasn’t meant to be, but in a year of widespread change, the team’s crease should remain relatively stable. The goal for Tetachuk will be proving that last year wasn’t just a standalone performance and that he’s capable of handling the majority of the starts once again.

“Starting in goal, I think we’re at a point where we’re going to continue to develop the goaltenders we have,” Anholt said. “I don’t really want to go outside to find another goaltender and I think that both Tetachuk and Thompson are ready to take the ball.

In supporting Tetachuk, the team also has high hopes for Bryan Thomson, a product of Moose Jaw, Sask. that the Hurricanes took in the second round of the 2017 WHL Bantam Draft.

Having earned three victories from his first five regular season appearances, it’s still too early to gauge Thomson’s ability to thrive at the WHL level, but fans and his team should get a better look this coming season in the backup role. 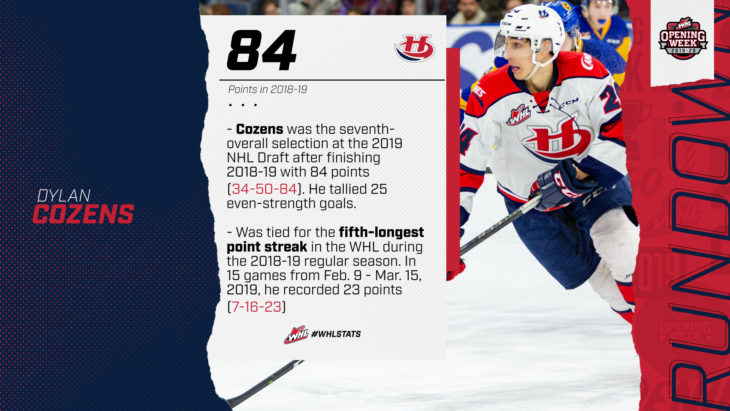 Player to Watch: There’s not much more to say about Dylan Cozens, but his skill at the center position will take the main spotlight for the Hurricanes this season.

After ranking second in scoring among draft-eligible players in the WHL, Cozens could easily be one of the top-tier offensive talents in the league and will be on the radar for Canada’s National Junior Team.

His 15-game point streak came to an end on the final game of the regular season, but that didn’t slow down the Whitehorse, Yukon product. Cozens added eight points (4G-4A) in all seven of his team’s games during the 2019 WHL Playoffs and was only held off the score sheet once in the series.

While Cozens his risen through the ranks in recent years, there was always the experienced core of forwards to help drive that offence. Now, Cozens is in that position, ready to make the younger players around him better. This will provide a true indicator of Cozens’ skills going forward.

Prognosis: While the Hurricanes enjoyed the upside of a deep roster last season, they’ve had to deal with the less fun part of that situation in seeing a strong off-season exodus as the likes of captain Jordy Bellerive, as well as Jake Leschyshyn and Nick Henry depart for the professional ranks.

In saying that, the team’s key additions came up from in the form of a pair of trades with the Victoria Royals. Both Dino Kambeitz and hometown product D-Jay Jerome will soften the blow to the Hurricanes’ offence. The addition of the import Okuliar can’t be understated either. As well, a strong rookie season from Zack Stringer would be a shot in the arm of the Hurricanes’ chances.

“It’s a situation here where similar to what we did a few years ago where we turned the team over,” Anholt said.

Back then, the Hurricanes handed the reins of the team to the likes of Tyler Wong, Giorgio Estephan, and Stuart Skinner. Now, Anholt is hoping the next generation can be just as good, if not better.

If Tetachuk performs at or very close to the level he was at last season, talking about the Hurricanes as a playoff team isn’t a far-fetched idea. However, where they are in the playoff seeding will have a lot to do with the performances of the Calgary Hitmen and Edmonton Oil Kings, two of the divisional favourites.

“I don’t think there’s any doubt in my mind that both Calgary and Edmonton are a step above everybody else in our division,” Anholt said. “Those two teams are going to battle it out for top spot in our division. With our club, we should be able to compete with the rest of the group within our division; at least I’m hoping so.”

On paper, the Hurricanes can consider themselves leaders established talent among the other four Central Division teams, but they’ll need to prove that throughout the full season in order to make any playoff hopes a reality.